“She's so unpretentious, it's sometimes hard to convince her how real her talent is.”

Gayle Kolb had once played some of the plushest clubs in Los Angeles, Las Vegas, and her hometown of Chicago. But it wasn't until she had been away from singing for a stretch of years to devote herself to family that she discovered herself as an artist-a jazz artist, which was what she'd always wanted to be.

Having seen the highly regarded Chicago bassist Dennis Carroll in performance and admired his work with singers, Kolb called him out of the blue for advice on reentering the music world-or not. “I knew he would tell me the truth about my singing,” she says. “He would tell me if I should go home. I was ready for that.”

During her afternoon “audition” at his house, Carroll had her sing songs at extended lengths and scat-something she had done very little of. “I wanted to see how much jazz she had in her,” he says. She passed all tests with flying colors. It didn't take him long to make a decision. “We can do a CD,” he told her after seven minutes, by his estimation.

That CD, released to coincide with Kolb's debut at the 2018 Chicago Jazz Festival, is Getting Sentimental, a title that shouldn't be taken at face value. With her low tones and coolly relaxed phrasing, Kolb never settles for easy emotion. “She sells a song without having to do the big dramatic stuff,” says Carroll. “She is a subtler conveyer of story.

“She has real authenticity,” he adds. “She's so unpretentious, it's sometimes hard to convince her how real her talent is.”

For his part, Carroll never settled for pat solutions as her producer and arranger. He enlisted the services of guitar great Bobby Broom, in whose trio he has long been a member; Cleveland piano phenom Joey Skoch; ace trombonist Tom Garling of the Chicago Jazz Orchestra and Chicago Yestet; and always-in-demand drummer George Fludas, with whom the bassist has performed frequently over the years.

Among the tunes Carroll had Kolb cover was Ray Brown's infrequently recorded “Gravy Waltz,” recorded by the Oscar Peterson Trio in the early '60s and set to words by famed talk show host and jazz pianist Steve Allen. “I had her go toe to toe, back and forth, with Bobby,” says Carroll. “It was real old school.”

“That song was so difficult, nobody does it,” says Kolb with a laugh. “I myself don't do many waltzes. But Bobby was helpful and supportive, and listening to the mixing. He's a real perfectionist. We worked really hard on that tune.”

Showing off admirable range, Kolb turns in a thoughtful version of “Two for the Road,” a bright but pensive reading of Marcos Valle's “If You Went Away,” and a beautifully restrained rendition of Jimmy Webb's masterpiece, “Wichita Lineman,” which Kolb recorded not long after the death of its beloved interpreter, Glen Campbell.

“Two for the Road,” which features a smoldering horn solo by Garling, may be the deepest track on the album. With its compelling blend of nostalgic happiness and regret, Kolb's wistful humming beautifully caps the performance.

“If You Went Away” was performed not as a slow ballad, as Stacey Kent did on her recent recording with Brazilian star Valle, but in a medium-tempo arrangement featuring Skoch on electric piano. “For Dennis, every song has to stand on its own,” says Kolb. “Every song has to have something new to offer to listeners.”

She had sung “Wichita Lineman” early in her career, when she mixed a lot of country and pop into her sets. Carroll chose the number, he told her, “to showcase you and your strength.”

“That was one of the first songs we recorded, so I was a bit nervous,” Kolb says. When the performance lost a bit of focus, Fludas offered encouragement. “He told me to keep doing what I had been doing. It's unusual to get direction from the drummer, but this was a total team effort.” Broom, who recorded the song for his 2007 album, Song and Dance, provides a plush safety net.

(Fludas also suggested a session-ending duet with Skoch. “Joey and I decided to do 'My Ideal,' a song close to my heart. Joey is such a monster musician, he had it all figured out after 15 minutes of rehearsal. That song is so true of me. I couldn't say what it says any clearer.”)

Kolb was born and raised in the southwestern Chicago suburb of Oak Lawn, where her father, Ernie Kolb, worked in city government and eventually served as mayor for nearly three decades. Gayle took piano lessons from when she was little until the age of 14. By then, she was singing in the high school choir. The first time she was asked to sing by herself, she says, she was greatly surprised: “I never thought anyone would want to listen to me.”

Kolb relocated to Los Angeles in the early 1970s and soon thereafter, serendipitously, found herself at an open-mic night, singing with a friend she described as “a folksinger type.” She faced her first major creative challenge when the house keyboardist, Mel Norfleet, played a song in the wrong key for her.

“I worked around the melody and made it work,” she says. “I learned some songs, came back the next week, and grew more and more confident. I ended up singing with a band six nights a week.”

Norfleet, himself a singer, became her mentor and urged her to go hear Lorez Alexandria, an acclaimed singer whom Kolb had not heard of. Attending a show by the Chicago-born Alexandria, alone at a nightclub in Watts, Kolb experienced a kind of ephipany. “Lorez was unbelievable,” she says. “She spoke the lyrics, pronounced them, and you believed every word. I realized that that was what I wanted to learn and accomplish with my music.”

Kolb did mostly commercial singing during engagements at the Hyatt and Bel-Air hotels in Los Angeles. But she discovered that when she inserted a jazz classic like “Midnight Sun” into her set, she drew the crowd in.

(Though Kolb has been compared to such cool-school singers as Peggy Lee and June Christie, she says her primary influences were Sarah Vaughan, Carmen McRae, and Joe Williams.)

After moving back to Chicago in 1974, Kolb was contracted to work five nights a week in a suburban showroom, a gig that lasted four years and gave her the opportunity to take her show to Las Vegas. Back in the Windy City, she was asked to fill in for Lainie Kazan, the theater and TV star. “I said I'd do it as long as I made her money,” Kolb says, smiling. “They agreed.”

In 1975, two years after the premiere of Stephen Sondheim's A Little Night Music, her manager wanted her to record its showstopper, “Send in the Clowns.” They went ahead and did a demo of the tune, but her major backer didn't like it and the project was dropped. Three months later, Judy Collins's Grammy-winning hit version of “Clowns” was released. “A missed opportunity,” says Kolb.

Having had it with commercial music, Kolb quit the music business to devote herself to her marriage and raising her daughter Katie. In 1985, she acquired a degree in business administration from suburban Elmhurst College, and found satisfying work as an interior designer.

But jazz beckoned. In the early 2000s, single again, Kolb reached out to musician friends and sat in at jams, getting her chops back and learning tunes again. Singing before audiences after all her time away proved “difficult and scary,” she says. After she called Carroll, though, her dream of singing the music she loved-for a living-came true.

Kolb's devotion to her folks is expressed throughout Getting Sentimental. “My father adored 'Serenade in Blue,'” she says. “Anytime I performed on Saturday night, he would be there and request it.

“The first time I sang 'I'm Getting Sentimental Over You,'” she continues, “I didn't think I'd be able to get through it. My parents, who loved ballroom dancing, were the ones who introduced me to all of that great music. My mother would play that song [and 'Stairway to the Stars,' another classic on her album] on the piano in the basement.”

In a nice tribute to Kolb, Carroll asked her to sing “Wing,” a blues for which he wrote the words and music. “It was a different kind of departure for Gayle,” he says, “but she liked it.” Though Carroll sold it to her as a simple tune, that's not how it emerged, fully orchestrated, in the studio. (It features an exciting exchange between Broom and Garling.) “That song had a mysterious quality to it,” says Kolb. “It just kept building and building.”

The same can be said of the appeal of Getting Sentimental, which sounds great the first time but gains in depth and dimension with each subsequent spin. Kolb may be a late bloomer as a jazz artist, but this first flowering of her talent on record was well worth the wait. 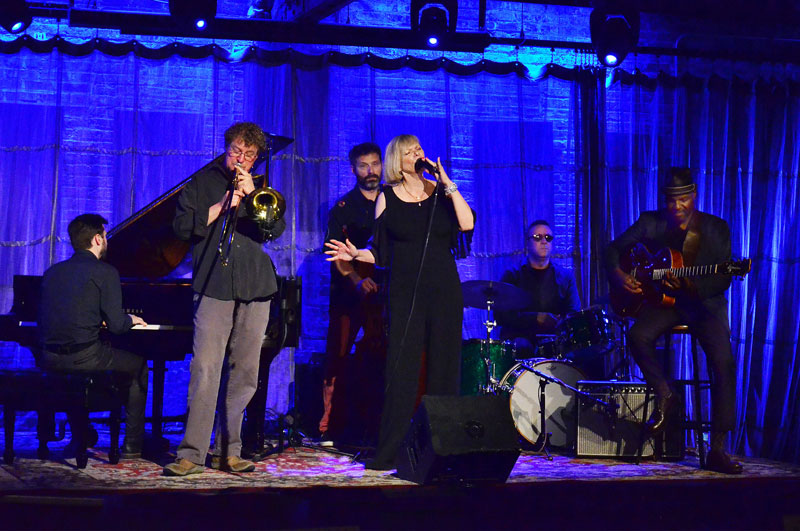 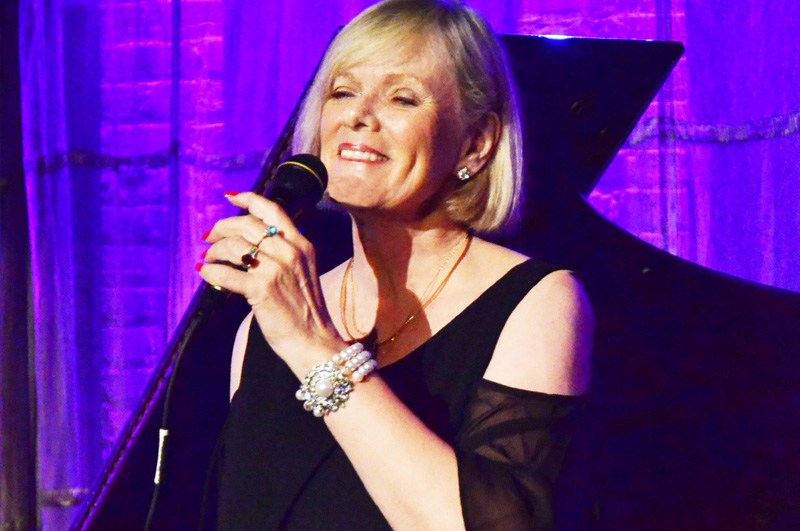 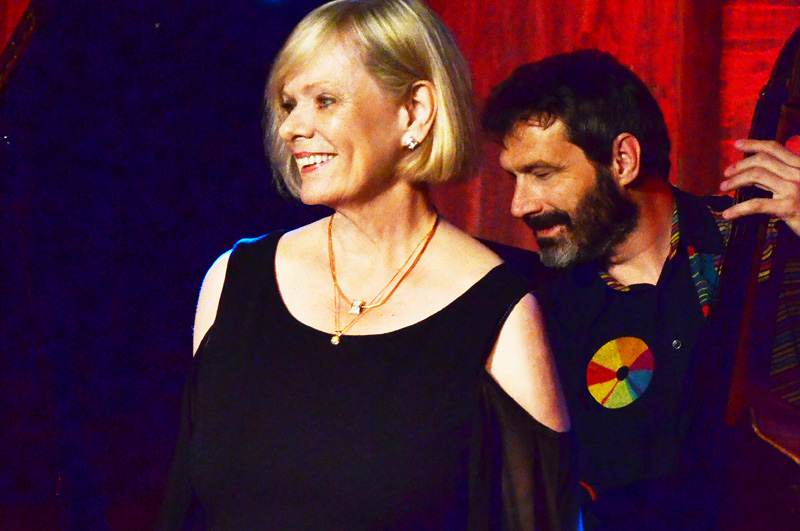 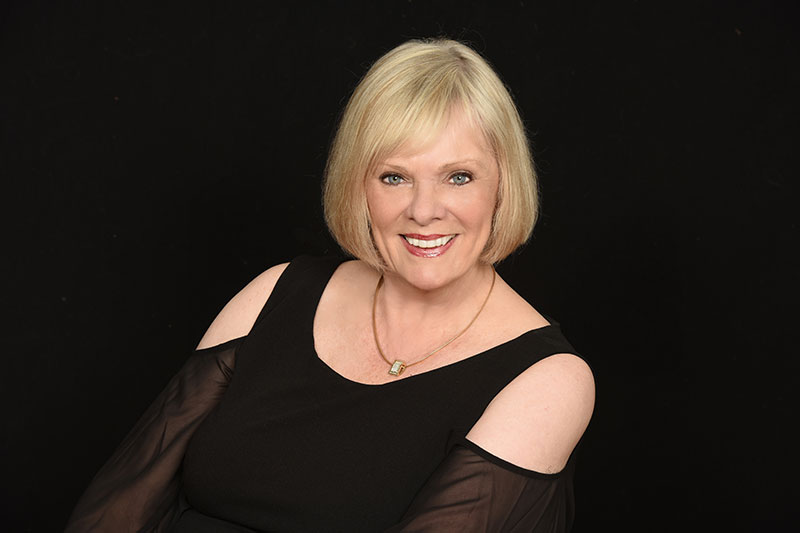 her life experience shows in the mix of honey and salt in her voice and in her frank, unpretentious delivery" Downbeat →